This is a shanked button (the shank was sewn by hand). 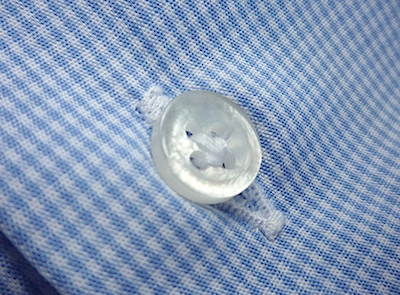 This button was sewn without a shank; you can see wrinkles around it (when it’s buttoned).

The thread shank can be sewn by hand or by a special machine called Ascolite. Handsewn buttons almost always feature a shank though sometimes you may find garments with buttons which were hand-sewn with a very loose shank – and this shank doesn’t secure the button properly. However, a hand-sewn thread shank can be very strong if it’s made properly. Thread shanks made by Ascolite machine are always strong, but there’re only a few shirt brands that use this machine. 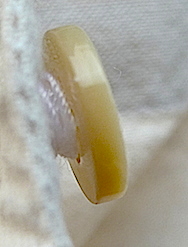 This shank is sewn by hand, and it’s too loose.

This thread shank was sewn by Ascolite machine.

I think that any truly high-end garment should feature shanked buttons. However, it’s interesting that sometimes even absolutely flawless high quality mother-of-pearl buttons are sewn without thread shanks. 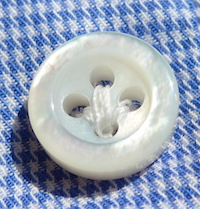 Flawless mother-of-pearl… and no shank!